Charles Duhigg has tried to explain, by giving Scientific reasons, why we do what we do in The Power of Habit. Whether it is smoking or drinking or any other addiction, human mind goes through similar patterns before it becomes a stubborn routine we call as habit.

Every habit has a lifecyle of “Cue” (the trigger) , “Routine” (the actual activity you do) and “Reward” (the pleasure you seek). For instance, stress can be a cue for smoking for the reward of pleasure it brings. Author has used individual and organisational examples to explain how habits can be formed for good.  He has illustrated how companies like Pepsodent have made their products popular by manipulating the cue-routine-reward funda.

Interesting thing that the author wrote about was the mistake people do to change habits. They try to change the reward whereas what is required is to figure out how to get the same reward by changing the routine. 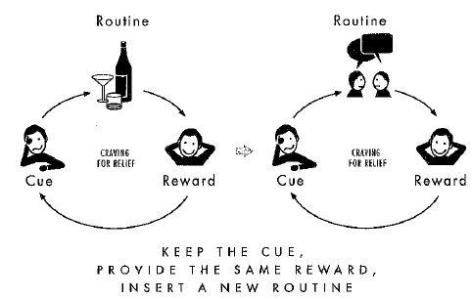 I like the basic idea of the book but it was a bit repetitive, too many examples made it a way too long for me. I would have probably liked it more if it was a bit shorter. Still, it makes a good read if you know what can you safely skip :).

Few lines from the book:

“The Golden Rule of Habit Change: You can’t extinguish a bad habit, you can only change it.”

“…hiding what you know is sometimes as important as knowing it..

“This is the real power of habit: the insight that your habits are what you choose them to be.”

“It is facile to imply that smoking, alcoholism, overeating, or other ingrained patters can be upended without real effort. Genuine change requires work and self-understanding of the cravings driving behaviours.”

“Rather, to change a habit, you must keep the old cue, and deliver the old reward, but insert a new routine.”

“This process within our brains is a three-step loop. First, there is a cue, a trigger that tells your brain to go into automatic mode and which habit to use. Then there is the routine, which can be physical or mental or emotional. Finally, there is a reward, which helps your brain figure out if this particular loop is worth remembering for the future: THE HABIT LOOP”

6 thoughts on “The Power of Habit: Book Review”

Life is Tough but its a lot tougher when you are stupid!!